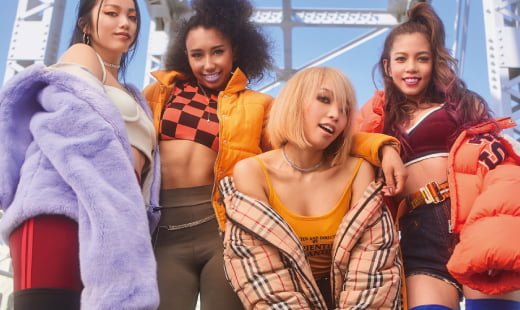 BananaLemon, made up of four talented in dancing and singing members, Nadia, Saarah, Mizuki and R!NO, has become well known as one of the powerful and sexy girl vocal-dance group.

At the beginning of their carrier, their talent were only seen on Web media and shrouded in mystery. Starting with releasing the first original song “#SorryNotSorry” on J-WAVE, they actively energetically do live performances, participate music festivals, and promote the group. Those led them to entering the spotlight.

In December 2016, BananaLemon was selected as an up-and-coming artist expected to make great strides for Early Noise Japan 2017 hosted by Spotify which is the music distribution service with more than 100 million active users worldwide. As soon as #SorryNotSorry was distributed to Spotify, it entered the Top 10 of the Spotify Japan’ s Viral Chart. Last year, 2017, the group performed at big events such as Summer Sonic, Vogue Fashion Night Out, and Asia Fashion Award 2017 in Taipei.

Whenever new songs are released, they make those high up in the charts. Their distinctive and tasty music style, which is mixture of 90s visual feel and current mainstream trends, continues to increase their fans.
This group is not yet debut but already getting a lot more attention abroad as well as in Japan. BananaLemon has gained momentum. You should definitely check out this group!