A collab with Grammy award-winning producer Todd Edwards is highly rated! Sinden who has released tracks from Defected and Night Bass makes his EDGE HOUSE debut!

Sinden from UK will make his EDGE HOUSE debut on September 21st.

UK-born DJ/producer “Sinden” is in the dance music world for more than 10 years. He released many hit tracks from “Kitsune” and “Ed Banger” in the past, recently “Defected”, AC Slater’s “Night Bass” and Tchami’s “Confession”.

“Deeper” which is a collab with Grammy award-winning house legend Todd Edwards released in May is a vocal house with Sinden’s unique track-making touch. “No Good”  in collaboration with Dr. Fresch, and “Bigger Than Jaws” with DJ Q, are full of bassline tastes. On the other hand, a collab with LO’99 released from Confession has a stronger bass. He continues to create a variety of records that will not get bored and attracts fans all over the world.

In addition, Sinden’s “Houseline” series of compilations on Insomniac records, unearthed various house artists based on the theme of “underground warehouse sound”. He is also an an expert crate digger as a label/compilation boss.

Join the event for ¥500 off! Click《Join》and you are on discount list. ※You must show your mobile phone screen of joined event page at the entrance.

YOU MUST BE OVER 20
本公演では20歳未満の方のご入場は一切お断りさせて頂きます。 年齢確認の為、ご入場の際に全ての方にIDチェックを実施しておりますので、写真付き身分証明証をお持ち下さい。 Must be 20 or over with Photo ID to enter. 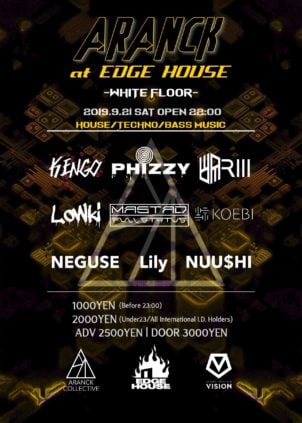